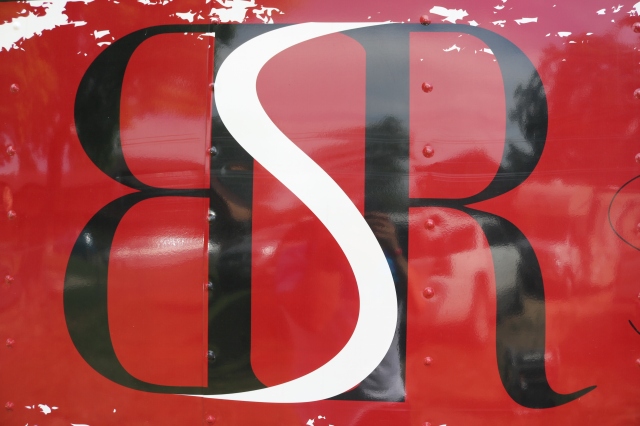 Hello Summer! FINALLY, my favorite season is here. Mike & I have just returned from an amazing trip spectating and cheering on our Big Sexy Racing teammates at Ironman Boulder. 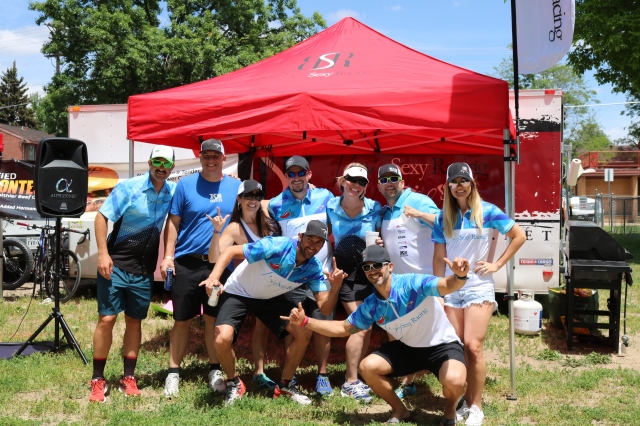 I have to say, triathletes are some of the best people in the world. Not only can they do physically amazing things, but they have the biggest hearts. Completing a triathlon (no matter what the distance) can be an emotionally overwhelming experience. To have support with fellow athletes as well as sherpas on the sidelines makes it such an incredible experience.  You find the strength you didn’t know you had, and can push yourself as well as push others to complete a goal or dream that you have set for yourself.

Mike and I arrived in Denver and our good friends (and fellow teammates) Kris & Trent were at the airport to pick us up. They were both signed up to race Boulder and still were so kind as to let us tag along and stay with them. They both seemed cool as cucumbers as we made our way to packet pick up.

We had fun at the expo checking out all of the tents. If you’ve been to an Ironman expo, you know it can be very easy to spend your moolah on all of the gadgets, apparel, etc. I had fun decorating a sign at the Base tent for Kris & Trent that would be placed somewhere out on the course.

After the expo, we drove around a bit, and up a mountain. The beauty of Colorado in the summertime is breathtaking (as it is in the winter, as well). I did have a little bit of an adjustment to make to the altitude (hey, I’m a sea-level girl!) Afterwards, we made our way to the Big Sexy meet up dinner at Wapo’s Mexican restaurant. 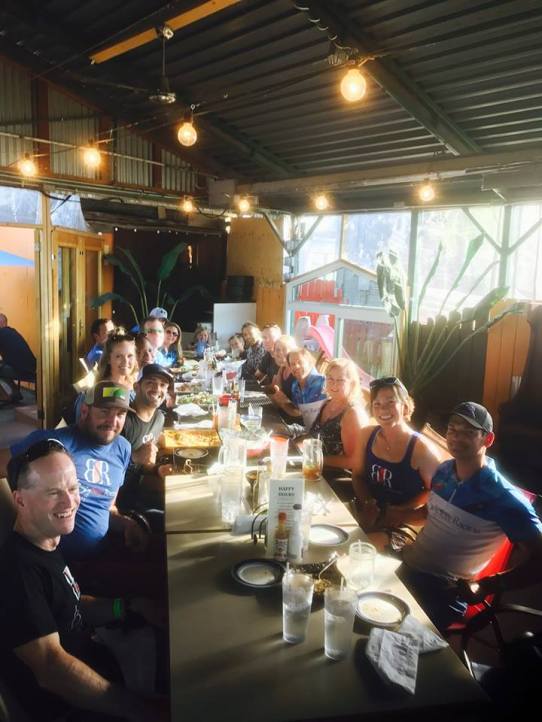 I was exctied to meet all of the teammates that I had only spoken to or seen through Facebook. As I was saying previously, triathletes are some of the best people you’ll meet. Everyone on our team was so humble and friendly. I also got to meet Big Sexy himself, Chris McDonald, and his wife Erika. They are the most down-to-earth, cool, and welcoming couple.

After dinner, we stopped at a brewery in Denver and Mike enjoyed some brews.

Really getting that Colorado vibe going.

Woke up still on Texas time, so Mike and I looked up an Orange Theory Fitness class nearby. I seriously love those workouts. Felt the elevation while running on the treadmill, though. 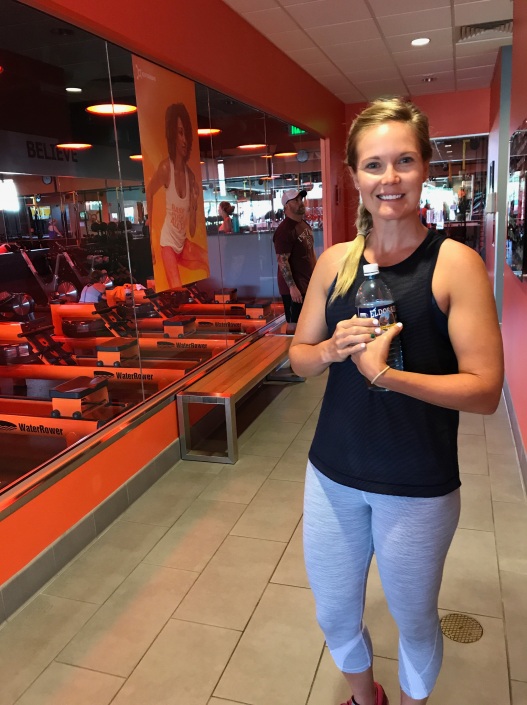 We headed back to Kris & Trent’s and had breakfast with them as they were getting all of their gear bags ready. I know what and ordeal this can be, but these two had it all down to a science. Once they were ready, they loaded up their bikes and we all drove back into Boulder so they could drop off their bags and bikes at Transition.

Mike & I had packed our swim gear just in case we’d get an opportunity for an open water swim, and since T1 was at the Boulder Reservoir, we were lucky enough to hop in the water. 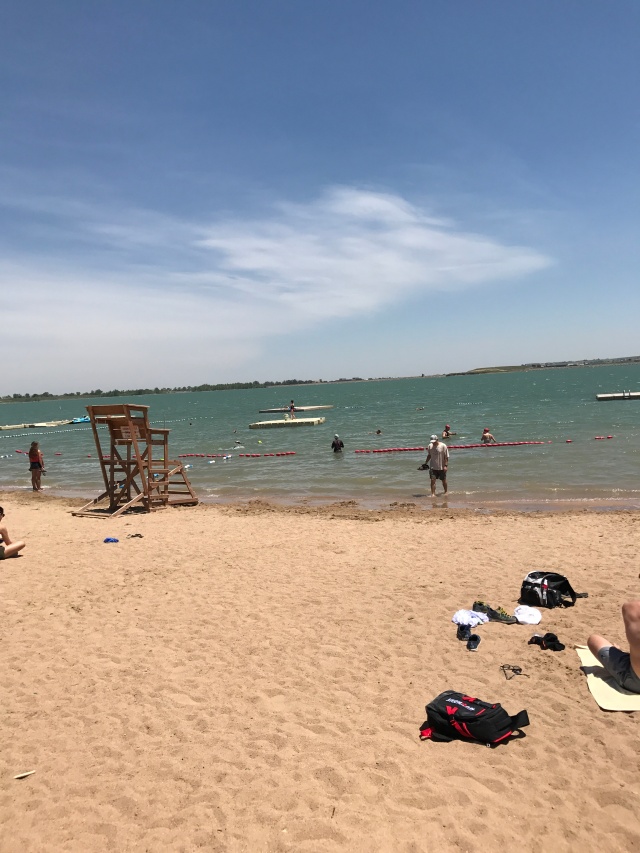 Let me tell you, it was windy when we got there and the water was COLD and CHOPPY. However, I appreciated it because it gave the feel of a real open water swim. There was only a 200×200 square roped off to swim inside, so it was a little tricky to get much distance in. We probably ended up swimming about 500m, but I was okay with that.

Kris & Trent had taken their bikes out for a little spin while we were swimming, and met up with us afterwards. They still had to go to T2 to drop off their run gear, and since we were in separate cars (they graciously lent us one of theirs) Mike and I went exploring.

I had seen this beach/park with water skiers, stand up paddle boarders, etc, on the way out of Lakewood, and since we were already in swimsuits, we made our way over. By the time we got to Bear Creek Lake Park, it was packed with families (because it was a 90 degree day) but we still managed to rent a paddle board and paddle around for awhile. I had a blast.

We got back to the apt and showered up. Kris and Trent got back from an early dinner and were going to wind down for the night. They recommended the Breckenridge Brewery, and so we headed out to find it. On our way we turned into a winery called Carboy and stopped for a glass of rose. That’s more my speed anyway ;).

We finished off the night at the Breckenridge Brewery and enjoyed a delicious elk burger and a beer. 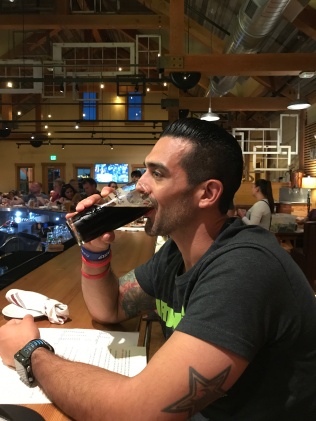 Then it was back to bed to get a good night’s rest before race day.

Since Lakewood is about 50 minutes away, Kris & Trent told us not to worry about waking up to make it for the swim start. We had arranged with the McDonald’s to meet at their place around 8:30am and help get the BSR trailer together and set up at the run course.

During this time I got to meet all of the BSR cheer crew we would be spending the day with. Everyone was so nice. We had a perfect spot on the run course to set up; about 1 mile into the first loop and about a 5k from the finisher chute. We got to see each athlete about 6 times during their race, which was awesome.

We had the music blaring, and some great kareoke singing from Erika (song of choice, “Baby Got Back”). There was so much energy and positivity; everyone was having a great time.

Before long, the pros started their run. Let me tell you, I was starstruck to see Tim O’Donnell come flying by, and not long after, Heather Jackson and Rachel Joyce! I have watched so many Ironman Kona NBC specials with them racing and now here they were right in front of me! 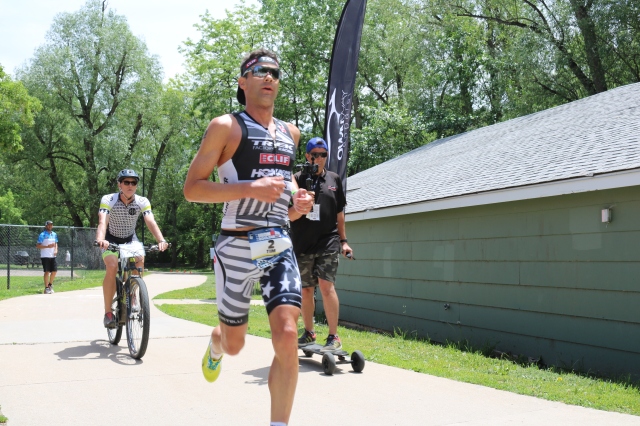 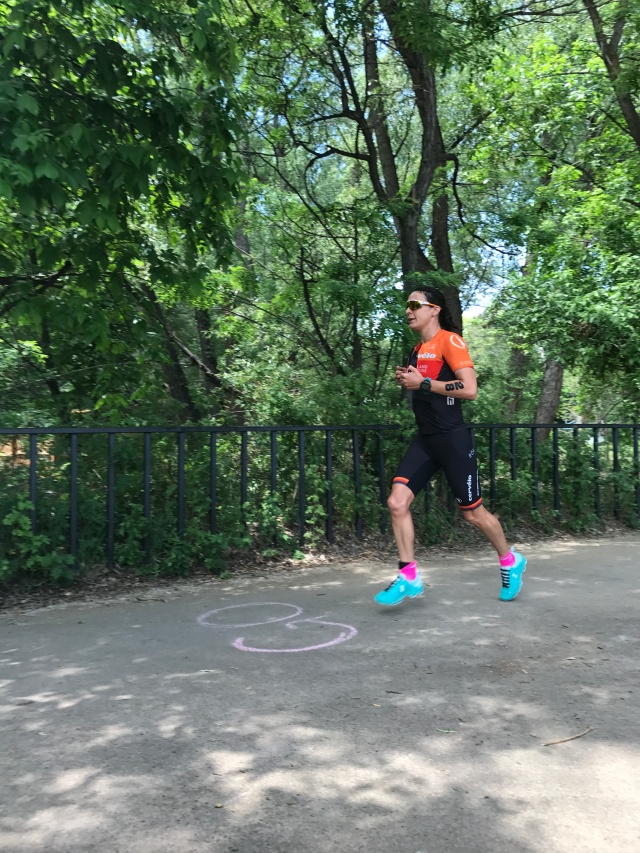 And when Tim was rounding his way to the finisher chute, his wife Rinny (my favorite triathlete) came riding by on her cruiser bike! I didn’t have my phone ready for a pic, but I totally geeked out!

The rest of the day was full of cheering, laughter, and fun as we sang, danced, ate, drank, and encouraged all of the athletes on the course. 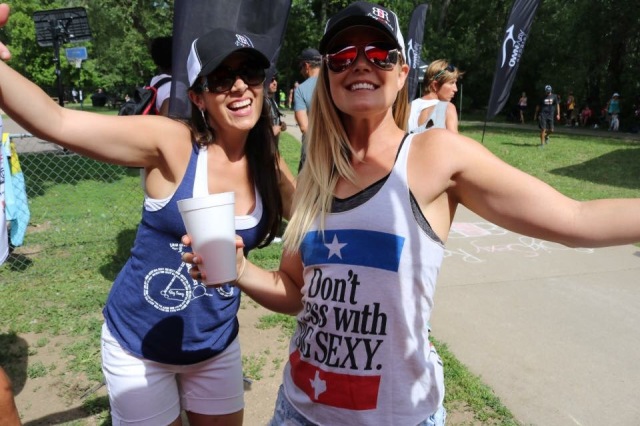 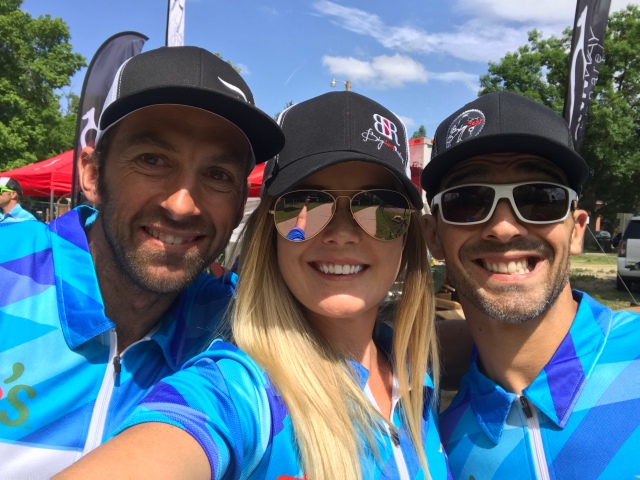 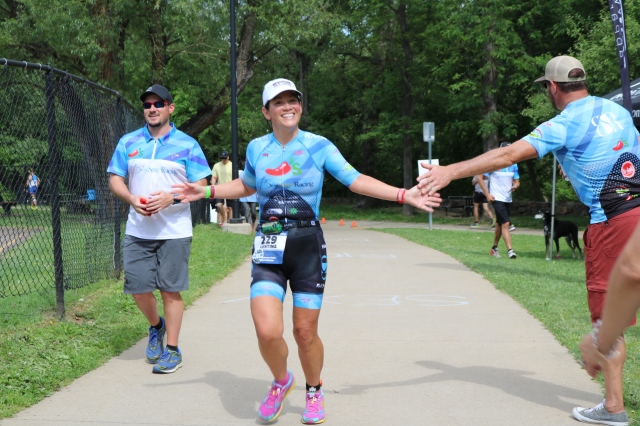 There’s Kris with her big smile 🙂 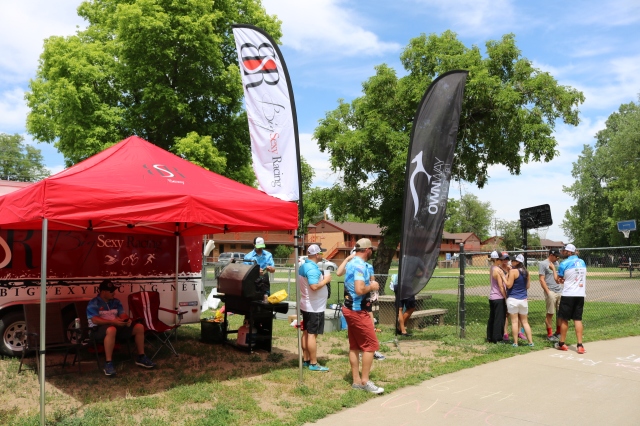 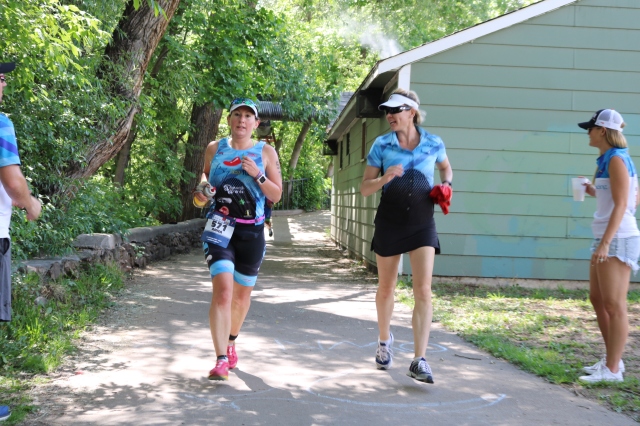 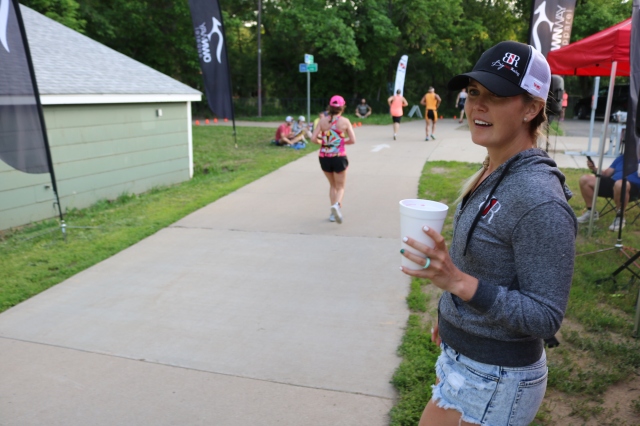 Both Trent & Kris are amazing athletes and had awesome times! As the sun began to set and the nighttime finishers began to run by, we had to pep up our cheering. These people have ben going all day and they need that encouragement. I’ve been there; everything hurts- it hurts to run, it hurts to walk. But when you’re so close to that finish line, your body can withstand it.

What an experience! The camaraderie and uplifting of others; that’s what it’s all about!

This was a day of relaxation and recuperation (and we didn’t even race!) When Kris woke up, she was a bit sore and stiff (as would be expected) but invited us to join her for a “shakeout swim”. We went to the local rec center pool and swam an easy 1000m.

After we cleaned up, we all drove back into Boulder to the McDonald’s house for the team celebration BBQ. Turns out Big Sexy Racing team won first in their division! That’s some badassery there!

After the BBQ, a few of us made our way into Downtown Boulder and walked up and down Pearl Street. Stopped at a couple of bars including The Lazy Dog. We all got to know each other better and share stories and each other’s backgrounds. I really enjoyed that.

Drove back into Lakewood and turned in for the night.

What supposed to be our “travel back home” day turned into an extended stay. We were able to change flight tickets for Wednesday, and so more exploration was ahead for us this day! 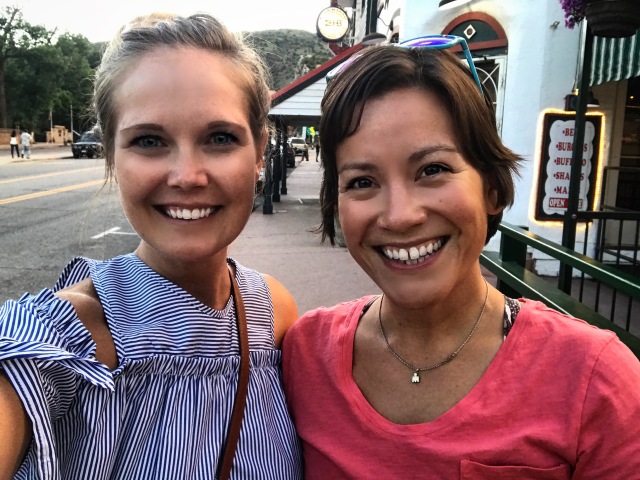 We got to visit the Coors brewery which was awesome! It was a free tour and ended with tastings! 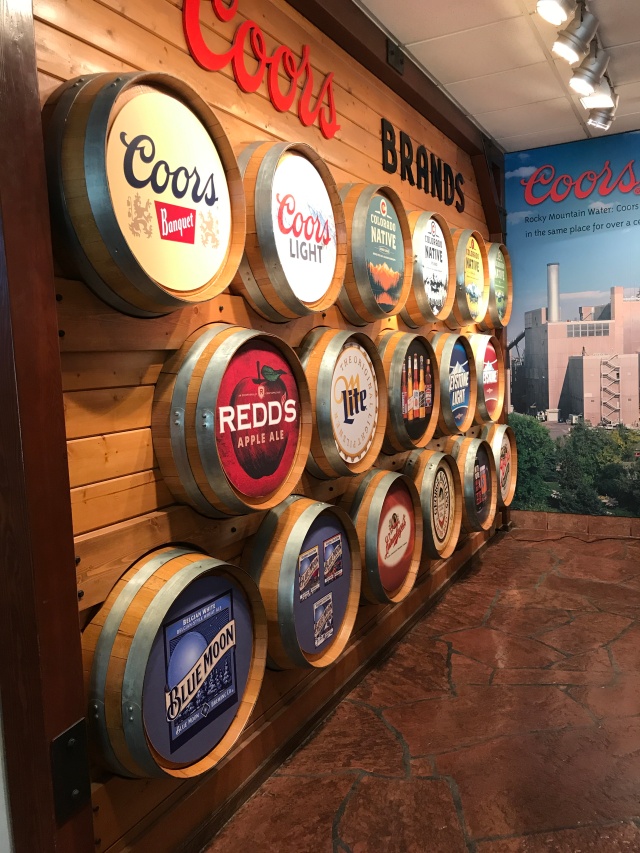 Then we headed down to the Red Rocks, which I’ve always been dying to see. Turns out there was a Doobie Brothers and Chicago concert going on at the amphitheater, but it was sold out, of course :(. We still enjoyed a rooftop deck and some delicious burgers.

As we were heading back, the sun was setting and it literally took my breath away. 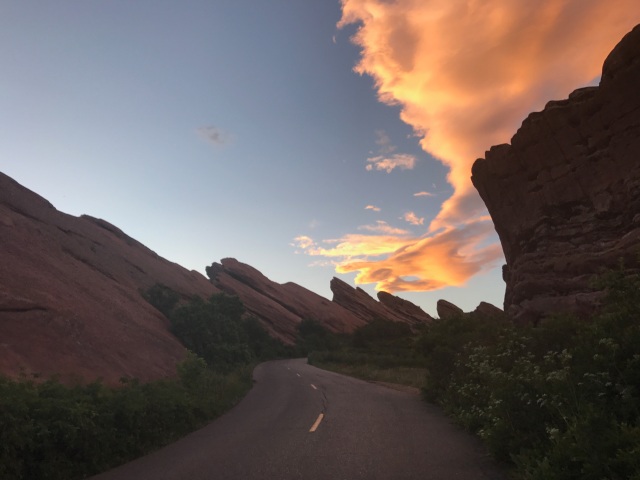 What a perfect ending to our trip!

I am so grateful for this wonderful experience and for all of the loving and kind people God has brought into my life! I am so proud and happy to be a part of this team and am now pumped up to take on my next race in 10 days, Buffalo Springs 70.3!